Posted at 09:00h in Awakening, Meditation, The Guru by Ishwari 0 Comments

They were all the same—I’m driving a car down a narrow road in the dark. I lean forward to peer through the windscreen when suddenly, with a bolt of shock, I realise I am going in the wrong direction.

After the third dream I decided to listen to what they were telling me. In order to travel in the right direction, I started to do things that connected me with my intuition. One of these was a yoga teacher training course. Toward the end of the course, in the winter of 2009, our instructor brought us all to satsang at the Ashram to meet her Guru, Swami Shankarananda.

It was a long drive from Blackburn, where the yoga teacher training was held, to the Ashram in Mount Eliza. I had no idea how to get there, as driving was, and is still, something I do because I have to, I don’t enjoy it. Mount Eliza seemed like another planet, an orbiting town very far away. I gratefully accepted a lift from another student who had been to the Ashram before.

I felt a bit shy of the Guru. When he walked down the aisle at Satsang he seemed to walk with the energy and power of the ocean. He was the advancing wave and swept in like the rush of water in a king tide. I didn’t know where to place him in the geography of my mind. That night during his talk he turned to look at me, and his right eye seemed to squeeze and pop almost out of his head. I wondered if anybody else saw this and looked around, but nobody seemed to be was paying attention.

When it was time for darshan my shyness immobilised me. I didn’t understand what darshan was and I told myself that I would do it next time, but my instructor was having none of it. She pulled me up and placed me before the Guru. He didn’t seem impressed, in fact he seemed to shrink away from me, and I thought, ‘he doesn’t like me’.

I didn’t know then that the Guru mirrors your own behaviour. It was difficult. On one side of me was my instructor, a forceful woman who was not above a bit of bullying and I hadn’t yet completed the course. On the other side was a Guru who from the first time our eyes met had awoken something within me, something familiar, something I had touched before.

It was the something that had got me through childbirth, that had told me to hold my awareness on a spot outside my body while I breathed through the powerful contractions that were shortening the muscles of my womb and widening the birth canal for my baby. It was the something that sat with me when, as a child, I sat cross legged on the bottom of the lake, each hand grabbing onto tufts of seaweed so I wouldn’t float to the top, looking up at the sunlight sifting through the water. With a glance from the Guru my mind had turned its attention to that something, had swivelled like the eye of Sauron, and I was aware in a way I hadn’t been before.

I went home that night with a big headache, so big I wasn’t sure I could drive my car from Blackburn, where I had left it parked, to my home in Warrandyte. It wasn’t like the migraines and tension headaches I was accustomed to, it felt like I had a metal cap jammed tightly onto the top of my head, from my forehead to the very back, and it hurt to think.

It took me 2 years to return, and in the intervening time that something had been quietly and insistently intoning within me. It was as if a magnetic lodestone had been inserted into my heart, pulling me unceasingly toward the Guru. At the same time, my outer world life was slowly rearranging itself.

In 2011 I signed up for the Ashram winter retreat. I wasn’t sure I would cope, especially with sharing a bathroom, but I was listening to my inner voice and it was impossible not to act. My heart was leading, and my mind, uncharacteristically, followed in silence, not commenting on unfolding events, just supervising practical details like packing a bag and finding out how to get to Mount Eliza. 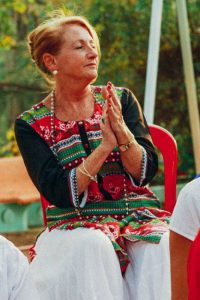 Gita on retreat in Ganeshpuri, 2017 with Swamiji and The Ashram

The days of the retreat slipped past like the pages of Italian Vogue, beautiful but without me knowing the language. Then came the last day, the day of the Intensive. Sitting in my chair with an orange sticker on my name badge marking me as a first timer, I became aware of waves of a scent filling the room, becoming stronger and stronger. It was hina oil, the scent the Guru wears. It was so strong that I thought, the staff was pumping it in.

I watched Arati to Bhagavan and the cracking of the coconut. After the introductory talks the lights were dimmed, and we started to chant the mantra, Om Namah Shivaya slowly. It was beautiful. I closed my eyes and chanted on the outbreath, taking a deep inbreath before chanting again.

The hall was full, there must have been about 300 of us waiting for Shaktipat from Guruji. Soon I heard the soft swishy thud of the Gurus wand of peacock feathers, and then I was aware of him quite close to me. He was approaching on my left, then suddenly the peacock feathers came down on top of my head. A rush of energy shot up from within, I gasped, and my head fell back. He caught it in his hand and gently righted it. A bright golden white light appeared in the left of my forehead. My eyes were closed, and the light was behind my forehead. A light appeared in the middle and then on the right, they appeared separately and then became one very bright intense light. Bliss began to sift through the cells of my body until as a whole I tingled and vibrated with the grace of God. I felt a little drunk, it was the intoxication of bliss, of love, of who we really are. I didn’t drive home that night, I flowed along the freeway, smiling big, smiling sloppily, completely at peace.

Shaktipat continued to unfold within me when I returned home. When I sat to meditate, waves of blue and red light flowed and swirled and folded over itself.

This was fine, but then one day something happened that alarmed me. I had no structure within my mind, no framework to understand what was happening, and I opened my eyes and stopped the meditation. I asked the Shakti to please stop what was happening because I was frightened and couldn’t cope, and She did immediately. The next day when I sat to meditate nothing happened. Absolutely nothing, and it continued that way. I was both relieved and a little disappointed.

I met separately with each of my children and told them what had happened. How could I not share my experience? I wanted them to understand that this knowledge was what I had been seeking my whole life, and that I had found it in Guruji.