05 Nov Always Stand Where I Can See You by Gargiji

Posted at 10:50h in Philosophy, The Guru by Ishwari 1 Comment

Always Stand Where I Can See You

The awakening of the spiritual energy by the Guru is central in our tradition.

I love people’s stories of awakening and Guru’s grace. 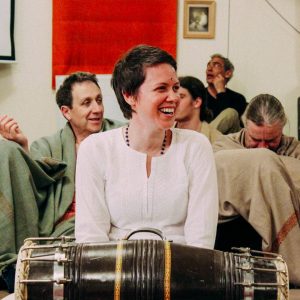 I had only been living at the ashram for a year or two, and I was going through a particularly rough patch. I can’t actually remember the events surrounding it, but I do remember that my mind was torturing me. I had an inner block that I couldn’t seem to move, and I hated myself for it. I wanted to ask someone for help, but I thought that my feeling was so awful that I was afraid my presence in the room would horrify people.

I didn’t know what to do with myself.

Now this was a few years ago, before Swamiji’s shoulders started to cause him trouble, and at that time he used to regularly play golf. Maybe someone told him that I was struggling or maybe he noticed that I was behaving strangely, but somehow on this day he invited me to caddy for him.

I was excited to spend time in his presence, but I was also really nervous. I had never caddied before. I didn’t want to do anything wrong. I was also worried that my bad feeling would disrupt Swamiji’s time on the golf course.

We got to the first hole and I gave Swamiji the club that he asked for. I wasn’t sure what I was supposed to do next so I kind of lingered over by the golf bag and tried to be as small as possible.

Swamiji teed up his ball and then turned around to see where I was. He then told me to stand somewhere in front of him. I moved, then he looked at me and said, ‘Always stand where I can see you.’

As he said that, two things happened. On one level I could hear that he was simply talking about golf. He was probably saying something like, ‘I’m about to swing a golf club, I need to know where you’re standing so you don’t get hit.’

But something else happened too. As he said the words, they entered a deep part of me, and I could feel that they carried the full force of the Guru’s Shakti and grace. I was flooded with light and happiness. My block disappeared.

I realised I was receiving a teaching that had nothing to do with golf. 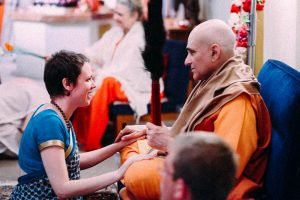 So, what does the Guru mean when he says, ‘Always stand where I can see you’?

The scriptures say that the Guru is the grace bestowing power of God. So, to stand where the Guru can see you is to hold yourself in a way that opens you to Guru’s grace and allows the Shakti to flow.