Posted at 14:18h in Meditation, The Guru by Ishwari 0 Comments

It'll All Be Ok

by Yogi Sri, written shortly after visiting Ganeshpuri in 2019 with The Ashram Mount Eliza

Next we all go to Vajreshwari, home (I later learn) of the builder of the new Sai Baba temple but, more importantly for us, the site of a famous goddess temple.

We zip along the moonscape of the local roads, dodging the worst potholes by millimetres. I am in an ebullient mood and lean forward to pat Hemanth affectionately on the shoulder. ‘You’re a very good driver Mr. 1 2 3 4.’ He nods with pride.

As we approach our next destination, I sing out, cheerleader style:

I am with Vani and Madhuri who laugh with delight. We are all a bit giddy. I’m not sure what Hemant makes of the attention though. Does he think I was taking the piss? Or maybe he likes it? I can’t tell.

The Vajreshwari temple sits halfway up a steep hill. Large bluestone stairs run from the entrance down to the busy main street. Hemanth lets us out at the base of the stairs where vendors sell floral garlands and religious knick knacks. 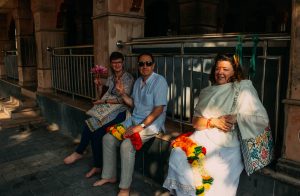 Yogi Sri sitting with Lilavati and Rabia at the Vajreshwari Temple

As with most temples in India, the garland sellers perform a dual service: as well as offerings for the deities they allow you to leave your shoes at their stall – a kind of protection racket, I suppose, but a useful one. I always feel like I’m getting a win-win when I buy a garland. The deity will be happy, and my shoes will be safe from thieves.

We walk barefoot up the stairs, now hot from the late-morning sun, and enter the courtyard that surrounds the temple.

I have never got much of a kick one way or another from this temple. However, it is beautiful. On a rare clear day, the courtyard has a spectacular view across the town and valley. Today is not clear and the nearby mountains and Tansa river are grey outlines. The sight brings up my usual worrying thoughts about the pace of development in India and its horrifying effects on the environment.

The Vajreshwari temple is made from massive bluestone blocks. A pillared assembly hall with galleries on each side leads to a small domed inner sanctum housing the deities. The temple is unusual in that it hosts manifestations of all three of the major goddesses of Hinduism: Durga, Lakshmi and Saraswati.

We wait for a while in the assembly hall. The harmonium comes out once again, and this time we sing bhajans to the goddess. Unlike our last stop, the temple is busy. Most people passing through pay us little attention.

As we chant, I look around. Above the entrance to the sanctum hangs a large oil painting depicting what I assume is the foundation story of the temple.

From left to right, we see three scenes. On the left, a heavily moustached hero, presumably Shivaji, the 17th-century revolutionary who fought successful battles against the British and Muslim overlords, is shown meditating in a forest. A vision of the goddess has appeared to him. In the centre, we see a battlefield with cannon and horse and Shivaji leading a charge. On the right, we see him gesturing with open palm to the Vajeshwari hill and temple.

I guess we have to assume the narrative goes something like this: Shivaji is meditating before a major battle when he has a vision of the Goddess. Taking this as an auspicious sign, he pledges to build a great temple to her if he wins. When he succeeds, he duly builds the Vrajeshwari temple. Alternatively, Shivaji calls on the goddess for help, promising her a temple if he wins. Or something along these lines.

I have been intrigued by this picture every time I visit the temple, but I seem to be the only one who has ever noticed it. The locals give me blank looks whenever I bring it up.

There are differing stories about the temple’s foundation. Our hotelier, Percy Kothavala, tells me the building was originally a Portuguese fort. If that is true, then apart from its elevated position, it is the weirdest fort design I’ve ever seen.

One of the senior ladies in Ganeshpuri, Indu, tells me: ‘The goddess used to be in the countryside near Akloli, (a village near here), but then she wanted to be in a new temple so they moved her to Vajreshwari.’

I am reminded again of just how ancient civilisation in India is. As an Australian, you forget. There have been temples in the Tamsa valley for thousands of years. But the climate is so harsh: dusty, baking hot summers followed by months of monsoonal downpour. You can literally see things age before your eyes. Freshly sealed roads are washed away. Brand-new houses become mildewed and seedy within a few years. Without constant vigilance, every building appears to subside and collapse in on itself, becoming a source of building materials to loot or the foundations for the next things to be built on top.

Folk history says there was a vast Ganesh temple in the valley thousands of years ago, and I can believe it. Even though there is no obvious evidence, the ruins would be lying somewhere under layer upon layer of history and sediments.

For the moment, however, the Vajreshwari temple is going nowhere. Our group piles into the tiny sanctum and Swamiji is garlanded and honoured by the Brahmin priests. I pay my respects to the deities then we all assemble on the steps outside for a group photo. 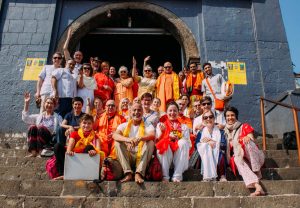 Group photo at the feet of the Vajreshwari Temple

At the bottom of the stairs, Hemanth is waiting for us once more, 100 metres down the street. This time the three of us sing out in unison: ‘1 2 3 4!’

The tuk tuk pulls onto the busy street, executes a U-turn and zooms around to collect us. Hemanth grins and we jump in for the bone-jarring ride back to Khotawalla. We say goodbye like old friends, and I tip him 100 rupees even though Moti has said not too.

… A few days later Vani and I are walking to the Gurudev Siddha Peeth (GSP) ashram about a kilometre out of town to meet the rest of the tour group. As we pass the tuk tuk stand, I say: ‘It’s hot, let’s take one’.

We walk to the head of the queue. ‘It would be cool if we could ride with Hemanth.’

But inside the vehicle at the head of the queue is a different driver. We both look around, but can’t see him anywhere. ‘Ah well, guess he’s not around,’ I say.

We jump in, engaged in the usual haggling over price, then just as we start to leave, we hear a booming, disembodied voice from the inside of the tin shed where the drivers hang out: ‘1 2 3 4!’