Posted at 09:33h in Meditation, Philosophy by Ishwari 0 Comments

During this period of Covid lockdown in Victoria it is easy to become negative and lose energy.  To battle against this, I have recently been contemplating what the most positive inner attitude for me to hold is.

One real advantage of this time is that it can be a boon to yogic practice.  As the distractions of the world forcibly drop away, the yogi can shine as they turn within and draw on inner resources for upliftment.

On a mundane level too, I concluded that this period of curfew is also great for letting me complete everyday tasks I might otherwise put off.  And one task that had been nagging at my consciousness for some time was to contact a certain company and let them know my new email and home address.

When I moved from my flat to Mt Eliza nearly a year ago, I was shocked by how much work is involved in letting people know my new details. The last time I moved, (31 years ago) there was no internet or email and somehow it made things much easier.

As my moving date approached, I did what a good ‘solid’ (thinking type) does: I drew up a list of businesses I interacted with and worked my way through contacting them. But there was one company I found impossible to get in touch with. It was not a minor connection but an organisation that looks after a big part of my finances. They could still reach me by post but as my postal redirection order is due to end soon, it was becoming more pressing to change my details.

The problem was that whenever I logged onto their website, I felt that I entered the Matrix:  I got lost in the code of a seemingly impenetrable world. I had forgotten my password. Now normally I would press the button that says, ‘forgotten your password?’ and they would send me a new one. But the email the company had was an old one that was no longer functional. I was in a conceptual loop: I needed my password to change my email, but I could only get my password if my email was changed.

The result was that I felt completely disempowered. I could not even adopt Swamiji’s very sage advice that if your own mind stops working you should outsource it to someone else. I felt too stupid to ask anyone.

Finally, I decided ‘enough is enough’. With an initial burst of positive energy, I got onto the website. I tried to contact them … and I failed.  I tried again … and also failed. I then rang their hotline and reached a person who told me it was ‘easy and I just had to go on-line’.  Thanks for that!

As I had so many times before, I gave up. I went for a walk and as I marched along in a bad mood, a thought came to me.  I remembered a story that Swamiji once told about a woman he knew who had two grandmothers who adopted quite different approaches to problem solving. When one grandmother had a concern, she sat down and tried to figure it out logically using her mind to the best of her abilities. The other grandmother (who happened to be Indian) did mantra practice and handed the problem over to God.

I had tried one method, maybe it was time for mantra. When I returned home from my walk, I sat down in front of my beautiful Ganesh who, as the overcomer of obstacles, seemed the perfect deity for the job. I repeated the mantra and asked if he would kindly help me. 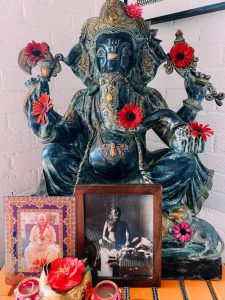 I went back to the computer feeling much calmer and in a sudden startling moment of clarity – akin to a revelation – I suddenly remembered my password! The computer portal swung open. Bing! I got into the website. Bing! I changed my email address and land address. Bing! I changed my password to something that I hopefully will remember. Within 2 minutes the source of my anxiety that had been present for a year disappeared.

Now I am not sure if saying the mantra took away my tearing thoughts so that I could act with a calm mind or if Ganesh really did swoop down to help me but either way I let out a loud cheer.

And my point is?  In this world we applaud people who use their minds productively but sometimes the best method is not to work away at a tricky problem making yourself crazy and getting nowhere in the process.  Sometimes, the better thing to do is to say the mantra. By calming the mind, the solution can often come to us.  And, if not, then at least we have surrendered the anxiety to God.

The outcome to my problem made me think with a smile: maybe mantra is the best password!