Posted at 15:20h in The Guru by online@theashram.com.au 4 Comments

The Zen of Cats

It is hard these days not to mention the elephant in the room, that is, Covid.

The pandemic has transformed life globally and here, in Victoria, we have been in Stage 4 restrictions for 4 weeks (2, at least, to go). This means we have a curfew at night and we can’t leave home unless it is for regulated reasons and wearing a mask. The great news is that it is slowly working and bringing the infection rates down, but it is hard going and the weeks are really grinding on.

I am not immune to the feelings of separation that these restrictions bring. Most of the time my spirits are good but living on my own occasionally I find that the lack of human contact makes me feel isolated.

Over the last two weeks, I had been feeling increasingly lethargic. My Shakti or spiritual energy was on the decline which is a sure sign for any yogi that we are moving in the wrong direction.  I tend to be stoic and independent and just push on regardless but last Sunday when I woke up I felt terrible. My feeling of malaise was compounded by the weather: there was a so-called ‘Antarctic blob’ over Victoria, which meant freezing conditions and hail and storms, so I couldn’t even go out into my garden.

Stuck inside, I realised that I had reached the end of my to-do list. I could not chase the bad feeling away with activity as I had finished my last household chore (cleaning out the garage) the day before. And even if there had been something productive to do, I had no energy to do anything. I felt despondent.  In fact, I felt so bad I couldn’t practice yoga as I normally would. I couldn’t Shiva Process myself, or meditate, or do mantra. Instead, I sat down and did the only thing I could do – I cried.

I don’t live entirely alone as I have my Siamese cat Raja to keep me company. He arrived at Christmas and he had never seen me cry before. Once he heard this unfamiliar sound, he came out of where he had been sleeping and jumped on my lap.  He looked at me, really looked at me, with great concern and focus. He stood on his hind legs and very gently put both paws on my face where my tears were streaming down. Ever so quietly, and with enormous softness but purposefulness he reached forward and nibbled the end of my nose, and then my cheeks, my chin and then started on my ears.

He had never done anything like this before and, by the end of this unusual form of love torture, I felt my sense of humour start to return to me. In my diminished state, Raja had become a Zen master and – in cat language – was saying to me, ‘I love you and I am sorry you are crying but get yourself together!’ 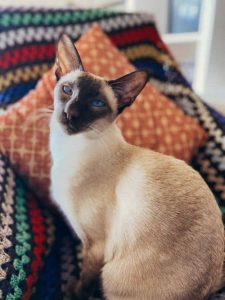 So, I did. I went and called Swamiji, who was very kind to me, and a very short time later things began to change. Several lovely people called me – some from the ashram, some just friends who had mysteriously just thought of me. Since that time, many more have called to make contact and I have contacted other people too.

On Tuesday night in Swamiji’s wonderful online program, in which he talks about his book on Kashmir Shaivism called Consciousness is Everything, he said that there are moments when the universe speaks to us (if only we listen). These messages show us that we are not the individual, disempowered and alone jiva that we think we are sometimes, but we are really Shiva or divine beings who are consciousness itself.  It is, he said, all about the narrative – what story do we tell ourselves?

Although it is quite natural to feel sad about being cut off from everyone at this time, consciousness was showing me that it wanted me to write a different narrative about connection and community.  The fact that my cat showed me this just made it even more delightful.

The truth is that we are a community. Everyone who is reading this post is part of the spiritual community that Swamiji so wisely and lovingly leads. No one says that we aren’t all going through a hard time at this time, but reach out either in person or through our programs if you feel separate and reconnect. There is a well-spring of Shakti that Swamiji generates through his work that is available to us all, all it takes is for us to make that first move.