Posted at 10:00h in Meditation by Ishwari 0 Comments

Here in Melbourne, we’re now at the end of a VERY long lockdown.

It’s been a hard Winter for us, and I must say, as difficult as it was getting organised working from home, the biggest challenge was living with a teenager.

My son Charlie is usually a good student in the classroom, he’s not the top of the class but he’s ok—and he’s a pretty happy, low-maintenance kid. I’ve been really lucky. But Charlie just hated online-schooling from home. And he’s going through year 9, which is that tricky 15-year-old age group.

He’s a Peculiar boy, which means an emotional type, and for them, how they feel affects their whole world. I watched him slide into a deep depression. He would get up in the morning, dress in all black tracksuit pants & a black hoodie and sit in front of the heater or on his un-made bed, staring at his iPad, pretending to do classes. I quickly found out, through emails and text messages from teachers that he wasn’t always logging on and pretty soon he had 15-20 overdue assignments and homework tasks. His grades went plummeting and so was his self-esteem.

I felt like I was living with a teenage version of gollem from the Lord of the Rings—a dark, depressed creature. He really worried me. I was starting to dread being around him, which is not good when you’re living with someone. It was so hard for him, because as an only child he has been unable to see anyone his own age for months now.

So, what did I do about it?

I slipped homeopathic remedies in his water when he wasn’t watching. I gave him Vitamin supplements – especially Vitamin D, which we call ‘Happy pills’ because they boost your mood.

I always ask,  ‘Have you had your “happy pill” today?’

They all had an effect for sure. But the most effective means was Shiva Process Self-inquiry and the mantra.

Shiva Process is Swamiji’s Self-Inquiry meditation technique, that investigates the inner world and four chakras. Charlie was so resistant he wouldn’t let me process him.

Swami Premananda, or Premji processed me.  (It’s good to have a buddy system in the Ashram).

First, she processed me about my anxiety about Charlie. Then we proxied, made statements for Charlie himself.  This is when you say what you intuit the other person might be feeling or thinking.

This really helped shift the feeling. I began to do it inwardly every few days, or when the feeling got bad in the house. I proxied Charlie silently in my inner world.

I also dedicated some of my meditation time to purely saying the mantra Om Namah Shivaya. I said it into the feeling-space of our relationship. 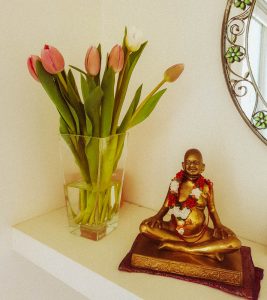 Brahmani’s puja at home with a murti of Bhagavan Nityananda

I began by saying, ‘I’m dedicating this to Charlie.’

One day I said the mantra very intensely. The next day Charlie woke up and seemed slightly better. I wondered if it was my imagination, but sure enough, every time I did it, he would improve. If I forgot to say the mantra, the feeling would slide back again. It was quite extraordinary!

The Mantra was something I did more mechanically when I first started meditating, but lately I’ve developed a different appreciation of it, and I’m convinced of its power.

Now, things have improved, and I’ve managed to get Charlie to meditate for 5 mins at the end of Guruji’s Study Group every Tuesday night and also at the end of the Thursday night meditation program. It’s not huge, 5 mins twice a week, but it’s a break-through and it makes a difference for him, and for me.

There’s a quote that I have on my study wall by Albert Einstein that says, “we cannot solve our problems with the same thinking we used when we created them.”

I have it there to remind me how to problem-solve when I’m working, but equally, that quote could apply to the ma 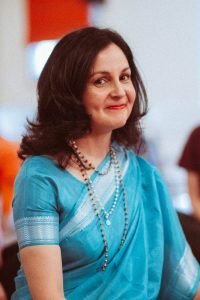 Brahmani Ma during her initiation ceremony held at The Ashram Mt Eliza, 2019

ntra, because the mantra acted as a circuit breaker for me. When my mind got locked into that pattern of worry, the mantra broke that loop and created a fresh space. It allowed the Shakti to come into the situation and unblock it.

I’m not saying it’s perfect now, but it is definitely much, much better!

So, in the middle of this lockdown, wherever you are, whatever you’re doing you’ve always got the mantra!